Freemasons and Gumbo’s: The Influence of Freemasons in Georgetown, Texas

The first time I met a Freemason, I was mesmerized by his ring. That chunky, flashy emblem looked crucial to whatever it was he did behind closed doors.

I proceeded to ask him a bunch of questions, all of which he either ignored, evaded, or evoked an expression of disdain. To be fair, my questions weren’t exactly thoughtful or well-thought-out.


“How many different secret handshakes are there?”

“Do y’all do sacrifices?”

“Did you read The Da Vinci Code?”

To discover that most of Georgetown’s founders were Freemasons was thrilling. And the downtown Freemason Temple, better known as Gumbo’s on the Square, is one of my favorite stops on our Ghost Tours.

If you researched when Freemasonry began, you’ll find that 1717 is the popular answer because that’s when the Grand Lodge of England was founded.

Strolling through New Town in Edinburgh, you may run across a building with the words, “The Lodge of Edinburgh (Mary’s Chapel) No. 1,” with roots dating back to 1599. The oldest proven and still operating Masonic Lodge in the world.

For decades, conspiracy theorists have said that Freemasons are a cult linked to the Illuminati. Some of those same conspiracists point out the symbolism on the US dollar bill and link them to the French Revolution.

Robert Cooper, curator of the Grand Lodge of Scotland, has a strong opinion about these rumors, “If we’re a secret society, how do you know about us? A real secret society is the Mafia, the Chinese triads. They don’t have a museum you can wander into.” (The Lost History of the Freemasons By Amanda Ruggeri,  December 2016)

But the Freemasons aren’t without some mystery. 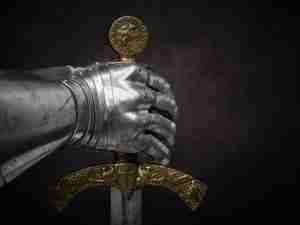 Ancient sword of the Order of the Knights Templar

The Knights Templar were like the Christian militia of the 12th Century. After the First Crusade, when Christian Knights had captured Jerusalem, pilgrimages to Jerusalem began. As the Christians headed to Jerusalem, bandits staked out the routes like earthbound pirates, robbing, pillaging, and murdering the travelers.

The travelers needed to be protected, so the Church brought in some brave do-gooder Knights to protect the pilgrims. The Knights took monastic vows and devoted themselves to their cause. In return, they were given a fancy headquarters on the Temple Mount; the Knights Templar was born.

Not only were they brave, but they were also good with money. Through their rudimentary promissory note system, the Knights grew their wealth and power. Which, of course, angered some of the world’s tragically insecure royalty, like King Philip IV, who owed them a ton of money.

King Philip needed a way out of his debt, so he ordered the arrest of the Templars in France on Friday the 13th, 1307. The charges were pretty racy. King Philip alleged the Templars’ initiation rites were blasphemous and scandalous; they included spitting on the cross, making out with each other, and kissing each other’s belly buttons and tailbones. These dudes partied like rockstars…or witches.

The Knights who refused to confess to the Satanic Panic were burned at the stake. By 1312, they had scattered, and the order dissolved. Or was it?

The Mystery School of Freemasonry

Besides the secret handshakes and mysterious rituals, being a Freemason takes time and commitment. You don’t just sign up, pay some dues, and show up for man-only ceremonies; you devote yourself to a life of learning and devotion.

There are multiple degrees that Freemasons can and are expected to move through. Most lodges that we see are up to “three degrees.” Then, once you move past the third degree, it branches out to different “Rites.”

The Scottish Rites and York Rites hold their own values and dogmas, similar in many ways but with core differences. Both Rites have degrees that ascend through the organizations; however, one is more autonomous than the other.

Both Rites have different Lodges and expectations for the advancement of degrees, which would take a lot more words than what I am writing in this post. But their intentions and processes are similar and extremely fascinating.

Freemasons: Back in the USA

The Knights Templar is one of the theories behind the formation of the fraternity, and is actually the final degree one can attain in the York Rite. But, what is universally agreed upon is the Mason’s direct lineage back to the Middle Ages in Europe as a group of skilled builders. However, today the United States Masons state that they originated in England, and the first U.S. Freemason Lodge was founded in Boston in 1733.

The fraternity holds strong theological views and ideals. But unfortunately, their beliefs and practices created some friction with organized Christian faiths, mostly the Catholics. Which makes you wonder if the Church’s beef did indeed start back with King Philip and the Knights Templar.

And then there was the scandal that reared up in the 1800s, The William Morgan Affair of 1826. Morgan was a former Mason who threatened to expose the fraternity’s secrets. He was arrested on some bogus charges, twice, and on his second stint in jail, a group of men convinced the jailer’s wife to release him to them. That’s when Morgan disappeared.

Eventually, a sheriff, also a Freemason, was arrested and convicted of conspiracy for kidnapping Morgan. Three more Freemasons were convicted for taking part in the kidnapping, and all served sentences.

Miller’s exposé was published and was a bestseller at the time.

The list is long and quite impressive from the looks of it, Freemasonry is practically a sure thing for success. It’s sort of like Scientology and celebrity; they go hand-in-hand. In fact, scholars claim that twenty-one signers of the Declaration of Independence were Masons.

Here are just a few of the Who’s Who in the world of Freemasonry:

Which brings us to Downtown Georgetown’s Historic Freemason Temple on The Square.

Gumbo’s in The Temple

What is now a downtown Georgetown staple, Gumbo’s North on the Square, used to be the home to the local chapter of Freemasons for over 100 years.

Originally a simple wooden structure, the Freemasons began meeting at that address on Main Street in 1872. Then, as the chapter grew along with Georgetown, they built the striking building that stands there now in 1900.

The San Gabriel Masonic Lodge of the Ancient Free and Accepted Masons of Texas met on the top floor for over 82 years. And back then, it was simply known as The Temple.

The original wooden structure was sold to the Knights of Pythias, who moved it off of its original location. Then Belford Lumber came in and constructed their new and much more grand Lodge for $8,500.

The Byzantine look is pretty over the top for small-town Texas, but the architectural elements are true to the integrity of the Freemason’s use of symbols. And that giant onion dome on top? Well, that just seems to keep their air of mystery alive.

The Mason’s moved out of The Temple in 1982, and the new owner’s vision became clear in the construction and remodeling – it was destined to become a restaurant.

Something else became apparent during the construction, it’s haunted. There are reports of doors opening and closing on their own. And on the top floor, where the Masons used to hold their meetings and ceremonies, folks report experiencing cold spots and feelings of uneasiness, a strong and unsettling energy around them.

The Old Masonic Temple has quite the history. Perhaps these hauntings are from the other businesses that operated inside the Lodge. 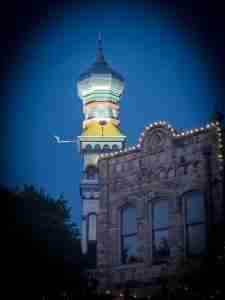 Or maybe the Masons left something behind…