In 1850s Upstate New York, the original rappers were knocking folks off their feet. The Fox sisters were selling out halls with their Spirit Talkers Show.

By the 1860s, the act of talking to the dead was more than entertainment, no longer considered a parlor trick, it had become a religion. Talking to the dearly departed was the foundation of Spiritualism, a new and progressive religion with its roots in the U. S.

But just like any movement or idea, the more popular it became, the more frauds and charlatans it attracted. It didn’t take long for the “snake oil salesmen,” and women, to jump on the séance game for money and fame, riding on the coattails of the Spiritualists.

And even with the haters screaming “fraud” and “sinner,” their tenets remained grounded in kindness and their mission never died. (almost a pun)

What we call Spiritualism today is believed to have begun in the 1840s. That’s when Maggie and Kate Fox in Hydesville, New York, showcased their “abilities” to conjure and communicate with the dead through rapping and knocking.

The Fox sisters were eventually thought of as frauds, and to which they admitted their “trickery.” But years later, they recanted on their admission and claimed that their spiritual encounters were all legit. By this time, Spiritualism had grown into a belief around the world.

Spiritualism was a religious movement in the 19th century that is a practiced religion today. Spiritualism is based on the three tenets:

But before the sisters were “table-turning” (a séance where the spirits communicate by tilting and rotating the table) and chatting with the dead, an 18th-century theologian was recording his experiences with spirits and angels.

Emanuel Swedenborg (1688-1772), born in Stockholm, Sweden, Emanuel was both a scientist and a theologian. Many consider him the father of Spiritualism.

As a young man, Swedenborg traveled to England, Amsterdam, and Paris, where he immersed himself in the studies of sciences: astrology, geology botany, zoology, and the mechanical sciences. He then published books on chemistry, physics, and algebra.

However, it was his book, Basic Principles of Nature, that began his esoteric journey into the study of the soul. And the beginning of his life-changing experiences.

In 1743, Swedenborg began having dreams that felt Divinely influenced. By 1745, he felt more spiritually awake and started recording his experiences, thoughts, and feelings. He believed he was in constant contact with the Spirit World.

He spent the next ten years writing about what he believed the Bible’s intentions were in Scripture. He explored his interpretation of each verse and how one should understand the writings as “correspondence.”

Swedenborg’s theology: the correspondence between the physical world and the spiritual world, the structure of heaven and hell and the lives of angels and devils, the interaction between the soul and body, and the interconnectedness of faith and charity. ~ Swedenborg Foundation

Swedenborg has many recorded instances where he was tasked to retrieve answers from the dead, and according to the individual seeking, proved to indeed be able to commune with the spirits of those who had passed.

It would be easy to turn this into an article on Swedenborg, the man offers a ton to think about regarding religion, spirituality, and the relationship between God and man; however, it is because of his intense and substantial studies and writings that he is known by many today as the “Father of Spiritualism.”

In February 1772, Swedenborg was asked for an August meeting. He declined. He said it would be impossible to meet in six months because he would die on the 29th of the next month. The spirits had warned him and once again, they were correct. Emanuel Swedenborg died on March 29, 1772; he was 84 years old.

75 years after his death, Emanuel Swedenborg’s theology would become the foundation for the Spiritualism movement.

In the U.S., The Fox Sisters carry the crown as the trailblazers in the Spiritualism movement, and with good reason. But something to note is that the belief wasn’t just séances and parlor tricks. Spiritualism was a progressive platform that advocated for equality, which was an uphill battle in the Victorian era.

Spiritualism had a huge impact on the development and growth of the Women’s Suffrage movement. Women were recognized as leaders in Spiritualism, both as mediums and as lecturers. It was an area in a patriarchal society where women were allowed to succeed. For the first time in America, women were leading a religion.

So why were women empowered and given equity in Spiritualism? Because all the  “biological” characteristics of women that made them “the weaker sex” were advantages in Spiritualism. It seems that being “overly sensitive” was just what the Spirit Doctors ordered.

This was more of a symbolic act than anything else, as by all accounts he didn’t know about it until after it was announced. Her championing of free love, her beliefs that marriage was institutionalized slavery and that sex should always be consensual, her insistence that women wear less restrictive clothing and her support of paid sex work were just a few of the “far-out” views that earned her the sobriquet Mrs. Satan. ~ Pam Grossman, Waking the Witch

Equality didn’t have borders to the Spiritualists.

It wasn’t just women who were acknowledged in Spiritualists’ concerns for equality. As Lisa Ruth Elliot writes, “In the 1850s, as Quaker splinter groups explored radial religion and radical politics, inviting speakers such as Sojourner Truth and fugitive slaves, Spiritualist meetings were also concerned with political and social reforms, offering resolutions like the endorsement of:

Equal enlightenment, enlargement, and consequent ultimate liberty of all human beings, and the abrogation of all oppression, civil inequality, domestic tyranny or mental or spiritual despotism, because freedom is the birthright of all, and the instinctive demand of every growing spirit.

Spiritualists backed not only the Suffragists, but also Abolitionists. They were a huge component in both movements and though it is not widely explored, Spiritualists played a large role in the abolitionist movement and women’s rights to vote.

Not all of these women were paving the way for equality, some were looking for a way to feed their families, some were seduced by fame, and others were simply looking for comfort after the loss of a loved one, but all were challenged by the patriarchy of the Victorian era.

Single Mom: Leah Fox Fish, a single mother deserted by her husband, and the sister of Katie and Maggie, was desperate for a way to support herself and her daughter. Her sisters’ rapping skills were a way out of the hole for her.

Failed Actress: Once a starry-eyed Broadway hopeful, Emma Hardinge Britten, was her mother’s caregiver. In the 1850s, she saw how bright the stage lights were for Mediums and hopped on the trance train. She traveled giving public lectures and performances on what her Spirit Guides told her about popular topics and social commentary.

Domestic Disobedient: Across the pond in the UK, Georgina Weldon, was in awe of the power of these women who were communicating with the dead. She used the platform of Spiritualists to fight her husband’s attempts at having her committed to an asylum.  She took it one step further and spent ten years fighting the country’s laws on lunacy.

In Mourning: Mary Todd Lincoln suffered great loss throughout her life. Her mother died when Mary was young, three out of her four children all passed, and of course, the brutal assassination of her husband, President Abraham Lincoln. Mary Todd found Spiritualism as a coping mechanism for her deep grief. She even hosted séances in the Red Room of the White House, in an attempt to be reunited with her eleven-year-old boy, Willie.

The séances proved to be such an effective coping mechanism for Mrs. Lincoln that she once remarked to her half-sister that, “Willie Lives. He comes to me every night and stands at the foot of the bed with the same sweet adorable smile that he always has had. He does not always come alone. Little Eddie [her son that perished at the age of four] is sometimes with him.” ~ www.whitehousehistory.org

Death in a Time of War and Disease

The Civil War (1861-1865) created more than 75,000 fatalities in the four years of conflict. That’s almost as many as the total deaths in the Revolutionary War, the War of 1812, the Mexican-American War, the Spanish-American War, World War I, World War II, and the Korean War combined. It left thousands of families to grapple with grief and loss. 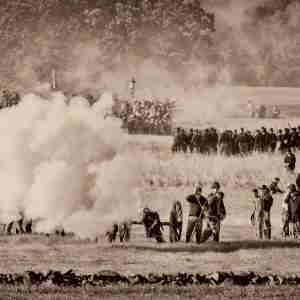 To add insult to the bereavement, many of the young men who died in battle never made it back home for a proper farewell and funeral. Bodies were often left on the battlefields. Perhaps their identity was lost, or their commanding officer used the opportunity to disgrace the enemy, either reason did nothing but hinder the grieving process for the family.

Those four years of war added to the decades of diseases like Yellow Fever and Typhoid Fever took a toll on the faith of many Americans. Parents, spouses, and siblings looked for methods of not just understanding death, but of understanding how to cope with traumatic loss. Spiritualism provided support and guidance for many of those grieving.

There is no doubt that the Civil War was the catalyst for the expansion of Spiritualism. It offered people the opportunities to say the goodbyes that the War did not. Grieving people found themselves around tables now putting their faith in a stranger to give their dead loved one a voice. The conjuring of spirits was no longer a sin.

The OGs of Ghost Hunting

Necromancy was nothing new in the 19th century; in fact, it was in fashion in antiquity with recorded practices in Ancient Egypt, Greece, and Rome. It’s even talked about in the Old Testament, with the supernatural powers of the Witch of Endor. Folks have been obsessed with the afterlife since the first guy died.

The names may have changed throughout the times, sorcerers, witches, mediums, empaths, and even in some respect, ghost hunters, all have had their skeptics and frauds. Bogus charlatans out to make money on the curious and vulnerable, or wannabe actors tired of chasing their “big break,” have muddied the waters for many believers.

And there are those who refuse to believe, usually because they haven’t had an experience of their own. Even Houdini made it one of his missions to get to the bottom of this “trickery.” After ten attempts at séances without even a “boo!” he decided Spiritualism was a dog and pony show.

But how do you deny someone else’s reality?

Today’s ghost hunters employ gadgets to either “debunk” or affirm an experience or presence in an investigation. Some even step away from their pseudoscientific inventions and bring along psychics and empaths to confirm the “dark forces” lurking in the Midwestern family’s home.

While the more woo woo tap into their ancestors and spirit guides using candle magick, smoke ceremonies, incantations, or a pocket full of pretty rocks. Or maybe you’re neither a paranormal enthusiast nor a woo woo warrior, just a regular person who had an unexplainable experience, secretly hoping it was your grandparent or friend or any dearly departed loved one who you miss so deeply.

Regardless of which compartmentalized category, you put yourself into, Spiritualism has you covered. The Spiritualists’ belief in equality, civility, and open-mindedness means it doesn’t matter how you tap into the spirit world, it just matters that you respect it.

In the immortal words of Tangina Barrons played by Zelda Rubenstein in Poltergeist:

If you’re in the Austin, Texas area and would like to visit a Spiritualist Church, you can do so at:

New York State has the beautiful Lily Dale: Home for Mediumship and Spiritual Healing since 1879

Find an organization near you, National Spiritualist Association of Churches