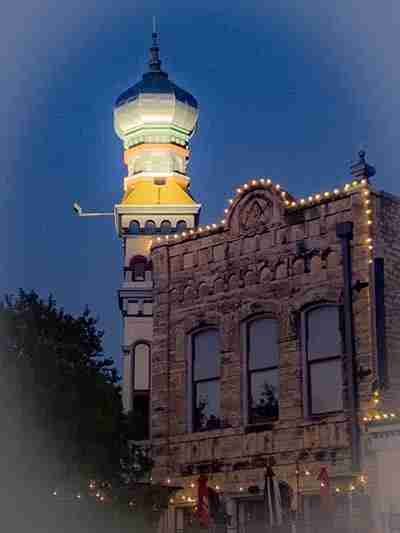 Beautiful Georgetown, Texas, the Central Texas town on the San Gabriel River, encapsulates old-world charm while welcoming modern innovation. The City is a favorite amongst snowbirds from the north and Texas weekenders from surrounding cities like Austin, Houston, and Dallas. Georgetown offers an escape from the hustle and bustle of city life without sacrificing city conveniences. It also offers her fair share of ghosts and hauntings.

In 1848, Williamson County was created, just three years after Texas became a state and after centuries of being inhabited by indigenous tribes. Five commissioners gathered around an old oak tree in what is now the historic district of Georgetown to choose the county seat. As the men deliberated, a man rode up on horseback, his name was George Washington Glasscock, Sr., and he was part of a land development firm. Glasscock had a proposition, name the town Georgetown (after him), and he would donate 173 acres of land that bordered the old oak tree. The commissioners obliged and they now had their county seat.

Now, 175 years later, Georgetown is still the county seat for Williamson County and has grown into the title beautifully. But don’t let the charming Victorian homes and vibrant downtown fool you; Georgetown has endured natural disasters and some of Central Texas’s most brutal murders in history. And today, the residual energies and intelligent spirits roam the streets and buildings of the City.

Home to Southwestern University – the first institution of higher learning in Texas, stunning Victorian architecture, and April’s famous Red Poppy Festival, Georgetown has much to offer. What was once a sleepy town north of Austin is now a destination for thousands of visitors who want to feel small-town charm with big-city conveniences. And meet a ghost or two.

Join Spell Caster Ghost Tours for an evening stroll through Georgetown’s historic and haunted downtown on the Ghosts of Old Georgetown Tour.

History comes alive in the Shadows

Ghosts of Old Georgetown is the Ghost Tour for the young and not quite as young, alike. Spell Caster strolls through Georgetown’s history and hauntings, painting a picture of what it was like to live during the days of the Chisholm Trail and public executions. Discover Georgetown’s intriguing past and the ghosts who still haunt the charming Central Texas City.

Who is the ghostly cowboy sauntering through the Square late in the evenings? Meet the sharpshooters, cattle rustlers, and cotton choppers who once called Williamson County home – and those who still do. Traverse the streets and alleyways on Ghosts of Old Georgetown, but remember to do a protection spell before the tour starts. Our ghosts are known to follow folks home.

Charming downtown Georgetown’s beautiful historic buildings hold some of the city’s most sordid secrets. Brutal murders, horrific torture, and senseless suicides lurk in Georgetown’s dark past. Join The Ghost Maker Tour and see a side of Georgetown you never imagined. With a tasty beverage in hand, discover Georgetown’s haunted history and unsavory secrets.

Grab a drink and stroll with us into Georgetown’s dark past. Did a Texas Family Feud lead to a murder-suicide at the turn of the century? Are the ghosts who lurk in the shadows of Georgetown’s Beautiful Historic Square malevolent? The Ghost Maker Tour is a blend of True Crime and Ghost Tour, with a splash of a Haunted Pub Crawl. The perfect recipe for a Wicked Good Time.