For folks who love barbecue, I mean really love barbecue, Louie Mueller’s in Taylor, Texas, is basically a meat church. It’s a place to sing praise to the sauce and worship the righteous rub. And it’s supposedly haunted.

But who are these barbecue-loving ghosts that move things and slam doors? The poor bovine souls and swine spirits who gave their lives for a smoker? Or do these ghosts have thumbs?

Mr. Louie Mueller was originally from Illinois but made his way to Taylor in 1936 and managed Taylor’s first Safeway store. Ten years later, in 1946, Louie opened his own grocery store on West 2nd Street. And that grocery store is where the legend was born.

Louie started serving barbecue lunches out of a shed in the parking lot next door to his grocery store to use any leftover meats from his market. The railroad workers were hooked, and Louie’s seed of legacy had been planted in Taylor, Texas.

He took what may be spoilage and made it a profit center. He started by drying and smoking meats. In our case, the immigrant population would swell the downtown during cotton harvest season. There weren’t enough eateries to feed them all. So grandpa looked at that and thought if he was smoking stuff he might as well cook for everyone. He then found out that this was where the money to be made. The smoked dried meats had a long shelf life, but also a long turnaround time. The barbecue could be cooked and we’d see the return in a day.  ~ Wayne Mueller: Texas Monthly

By 1959,  the “Cathedral of Smoke” had grown their meat congregation to biblical proportions and Louie acquired a 100-year-old building just across the street from his supermarket. The building was once a boxing gym and girls’ basketball court. It soon became the home of a monster pit and hungry followers. 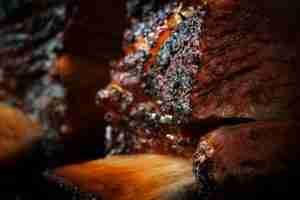 Louie needed help on the fire. The legend of Fred Fontaine began early on. The story goes that Fred stepped off a train in Taylor after WWII.  He found his way over to Louie and was hired to do odd jobs and general help around the supermarket. He eventually made his way to the pit and slew it.

In 1974, Louie’s only son, Bobby, stepped into the pits. Bobby finished university in the early 1960s and returned home to Taylor. He worked in the family grocery store until it closed in 1974. It was then that he took over Mueller Barbecue. Fred worked with Bobby until 1987.

Bobby made contributions to the operations, as well as to the menu. He also led Louie Mueller’s Barbecue into the national spotlight. In 2006, Bobby was awarded the James Beard award.

Dad won a James Beard award in 2006, but that didn’t really move the needle for us. We were on the first season of Diners Drive Ins and Dives and we saw business go up forty percent the first time it aired in 2007. It brought us a whole new audience of travelers. ~  Wayne Mueller: Texas Monthly

Bobby and Lenore Mueller had three children: John, Wayne, and LeAnn; all followed in the family’s footsteps of smoking and grilling.

In the late 1990s, John worked with his dad for a few years before he branched out on his own, running and owning different barbecue restaurants around Central Texas. LeAnn Mueller opened an East Austin favorite, La Barbecue, in 2012. Wayne has been at the wheel of Louie Mueller’s since 2006.

Just a few months after the James Beard award, Bobby called his son Wayne and told him it was time to retire. Wayne told his father he would come home to help and promised that he would “keep this going” when Bobby was gone. Wayne has done just that.

But it hasn’t always been sweet heat and oak smoke. The Mueller family has experienced tough losses.

Monday, December 21st, 1992, Louie Mueller succumbed to a heart attack. He was 86 years old. Louie told the woman who helped him out at home that he was “going to spend this Christmas with his wife.” Unfortunately, he passed not long after expressing his desire to reunite with his love.

His wife, Leonore, had died two years prior.

Fred Fountaine worked for Louie from 1947 until 1987. He shared his sentiments with the Austin American Statesman after Louie’s death:

He was just like a daddy to me. It sure hurts down deep. You couldn’t find a better man. ~ Fred Fountaine

Fred Fountaine’s forty years with Mueller were pivotal. At one time, many of the locals in Taylor referred to Louie Mueller Barbecue as “Fred’s Place.” Unfortunately, about ten years after Fred left the Mueller pits, and seven years after Louie died, Fred Fountaine passed away.

There was more loss to come.

On a Friday night in September 2008, Robert “Bobby” Louis Mueller died in his sleep. His wife discovered him Saturday morning. He was just 69 years old. Bobby was an avid runner until a few years before his passing and seemed to be in good health. His death was a huge surprise and an even greater loss for the Mueller family and Taylor community.

I was pretty numb for about two years. It still seems like it’s been one long day since then. ~ Wayne Mueller

Fate had guided Wayne back home.

More recently, another loss hit the Mueller family when John Mueller passed away in December 2021. John’s skills with the pit were referred to as artistry by many. His bombastic personality and unpredictable behavior gave him the moniker “the Dark Prince of Texas Barbecue” by Texas Monthly.

He went hotter and faster than almost anyone. He really did everything by feel. I doubt that guy ever owned a thermometer. ~ Aaron Franklin, Franklin Barbecue

You’d be hard-pressed not to feel the presence of these pit influencers when you enter Louie Mueller Barbecue in Taylor, Texas. The passion and hard work still linger in the smokey atmosphere. But is Louie Mueller’s legendary restaurant really haunted?

The Ghosts of Louie Mueller Barbecue 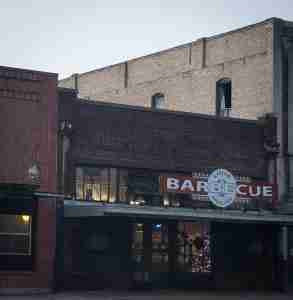 A local paranormal group did an investigation inside the Taylor landmark; their findings brought them to an affirmative conclusion. But who the ghosts are is still a mystery.

In 2020, Truly Haunted spent a few hours conducting an overnight paranormal investigation of Louie Mueller Barbecue; they captured orbs, disembodied voices, EVPs (electronic voice phenomena), and video of a what appeared to be a shadow figure. Do we know who or what these hauntings are?

Some of the voices that were captured in EVPs made fairly clear statements, answering questions instigated by the investigators.  Without knowing the pre-pit days history of the building, it’s impossible to speculate who the voices are. You see, none of the voices ever reference the Mueller family.

Once the gear was set up and the lights turned out, the provoking began. One voice came through on the recorder, “My name is Victor.” The same voice came back with a more ominous statement, “Want her again.”

But then, a different voice, a few moments later came across the recorder, “This is mine.” A bold statement.

For skeptics, these voices could be attributed to interference or noise pollution. However, something else happened that might be more difficult to explain.

A REM-pod is a device that many paranormal investigators and enthusiasts use to detect temperature changes and changes in the electromagnetic field (EMF). There are lights that flicker and light up when something is disrupting the energy field around the REM-pod.

When the investigators set up their gear, they placed a full spectrum camera and REM-pod in a room. After the investigation, they reviewed the video footage and saw quite a few orbs. Then, suddenly, as one of the orbs appeared and began to dance around the room, the REM-pod lit up. Alerting that there was something disrupting the atmosphere in the room.

In another area of the building, one of the cameras picked up something else. A small white figure crosses in front of the camera. Not exactly a mist, more like a pale shadow. Light pollution from cars passing outside? The outline of the figure and the way it moved suggests it was something inside the room, not a reflection.

The members of the team interviewed some of the employees, including the General Manager. They corroborated the hautings. The GM said there were times when she heard dishes falling off their shelves, but on inspection, nothing had fallen. Residual sounds?

On other occasions she would hear the startling sound of the back door opening and closing. And the cook timers would intermittently go off on their own. Maybe Fred is done with his brisket? 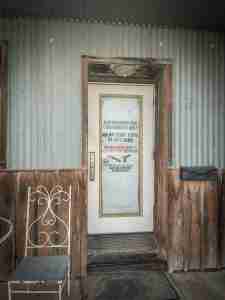 Taylor, Texas isn’t short on lore and legends. Louie Mueller Barbecue has not only added to the Lone Star appeal of small town Texas, but it has made it’s mark in Taylor’s haunted history.

It’s heart warming to believe that the energies inside the barbecue spot are of those who built the Louie Mueller empire. Still preaching in the Cathedral of Smoke and leading the congregation into barbecue bliss.

If you haven’t been to “a service” at Louie Mueller Barbecue in Taylor, well, that’s a sin. We highly recommend you stop in and pay your respects to the ones who praise the pits and sing the gospel of the grill.

For more on the Ghosts of Taylor, Texas, join us on our Haunted Pub Crawl: Taylor’s Spirits After Dark