…And I Am Proof

The sleepy Central Texas town northeast of Austin is truly Texas. The German-influenced architecture of the downtown buildings, the cotton farms surrounding the area, and the number of diesel pickups on Main Street screams, “small-town Texas!” But don’t let the quaint 19th-century surroundings fool you; Taylor, Texas has some ghosts. 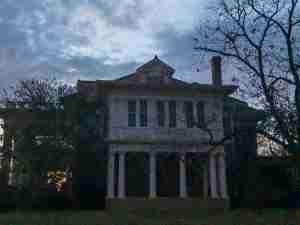 Originally settled by Germans and Slavic immigrants, Taylor was an important rail shipping center in the late 1800s. Texas Land Company began designing Taylor in 1876, anticipating the construction of the railroad. It even got its name from Edward Moses Taylor, an official with the Great Northern Railroad. And by 1884, Taylor was moving cattle, cotton, and grain through the city.

But, in true historical Victorian fashion, Taylor was hit with a fire that destroyed most of the city’s buildings in 1879. Today we see mostly brick and stone structures; they are the replacements of the buildings lost to the blaze.

In 1877, the first cotton gin was built in Taylor. The town quickly became a farming hub in Central Texas. Taylor was growing steadily into the 20th century. Until the most devastating flood Central Texas had ever experienced happened in 1921.

The Central Texas Flood of 1921

September 1921 brought loss and devastation to Central Texas. Austin received 19 inches of rain on September 9th and 10th – to this day, that’s still a record for the state’s capital. But Taylor got hit even harder with 25.38 inches of rainfall ruthlessly dumping over a 48 hour period.

The floods claimed 215 lives across Central Texas. Ninety-three of those lives lost were in Williamson County; Taylor was the home to 83 of them. The San Gabriel River was raging. At the river’s juncture with Brushy Creek, the river began to widen. By September 9, 1921, the river had grown ten miles wide. For the next six months, bodies were still being discovered along the banks of the San Gabriel River.

Are the poor souls who were tragically lost in this natural disaster the ones still roaming the small Texas town? Fires and floods provoke intense trauma, survivor’s guilt, fear, and grief. Could these events leave residual energies behind?

Taylor grew conservatively and steadily through the twentieth century. However, the new millennium is showing more rapid growth. At the end of 2000, the population was 13,575; by January 2008, it had grown to 17,663. Which meant there was now a need to manage the growth and revitalize the old.

Many of the old buildings that had been shuttered were getting some TLC. Restaurants, bars, and retail stores began opening. Residents and newcomers were showing interest in preservation and growth. Perhaps it was this hustle and bustle that started to stir things up for the spirits. Or maybe these energies had been active all along, but nobody was visiting them.

Taylor has a few folks that have made their mark around town and even around the world.

Dan Moody, the youngest governor of Texas at the age of 33, was the son of Taylor’s first mayor, Daniel James Moody, one of Taylor’s first settlers in 1876, and his mother, Elizabeth, who was a school teacher in Taylor.

Young Dan Moody completed law school at the University of Texas, and at 21 years old, became a member of the State Bar of Texas. By 1915 he was practicing law in Taylor. And when World War I broke out, he joined the Texas National Guard, then became a 2nd Lieutenant in the United States Army.

In 1922, Dan Moody became District Attorney in Williamson County Texas, and obtained a groundbreaking conviction. Moody convinced the courts to convict four members of the Ku Klux Klan for beating and tarring a white traveling salesman who was an opponent of the Klan. Most would agree that Moody was the hero in bringing the Klan down in Texas.

However, Dan Moody wasn’t done righting the wrongs in Texas. In 1925, Texas Attorney General Moody investigated the husband of then governor, “Ma” Ferguson. His investigation of James E. Ferguson recovered $1 million of taxpayers’ funds. And in the next race for governor, Moody defeated Ma Ferguson to become the youngest governor of Texas, at just 33 years old.

In addition to the impressive Dan Moody, Taylor has had a few more folks that deserve recognition. From cowboys to wrestlers to animators and Hollywood legends, being Taylor-made is the Midas touch for some.

There was Elmer “The Pet” Brown, who, in 1914, won the World middleweight crown in wrestling. The Pet began wrestling in his family’s cotton gin, and Taylor soon became the hub of Texas wrestling. His career was impressive, and sadly he was shot in an altercation that many say was undeserving.

Bill Pickett was an African-American cowboy who started the “bulldogging” craze in steer wrestling. Bill would bite the cow’s lip while falling backward. He performed his tricks and stunts at county fairs and soon became so popular he joined the 101 Ranch Wild West Show under the show name, “The Dusky Demon,” with other acts like Buffalo Bill and Will Rogers.

The Dusky Demon even made it to Hollywood, appearing in the films, The Bull-Dogger and The Crimson Skull, in 1921. But it was after he retired that the ranch life would be his demise. In 1932, Bill Pickett was kicked in the head by a bronco and died. The Cowboy Hall of Fame initiated The Dusky Demon in 1971.

Also, in the entertainment industry, Frederick “Tex” Avery was born in Taylor in 1908. After studying at the Chicago Art Institute, for one whole month, he let his creative juices guide him to Los Angeles. And that’s where he gave Walt Disney a run for his money.

Loony Tunes brought us Bugs Bunny, Daffy Duck, and Porky the Pig, to name a few. Well, those animated characters that many of us grew up with were out of Taylor’s own Tex Avery’s brain. He went on to sign a contract with MGM and ended his career with Hannah-Barbera. Nothing short of a creative innovator, Avery led an interesting and influential life; he passed away in 1980 at the age of 72.

But the celebrities and cotton gins aren’t the only thing interesting in Taylor, Texas. The ghosts deserve their day in the limelight, as well.

It’s not unusual for locals in towns to shrug off claims of paranormal activity. Most of the population are skeptics, after all. And rightfully so, it’s pretty hard to explain a haunting to someone who has never experienced one personally. But the folks in Taylor know they aren’t the only ones there, and for the most part, they seem pretty fine with it. 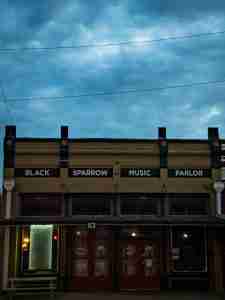 Reading books written by historians and Ph.D. dissertations is great when researching a town’s history. But talking to the community and locals helps paint the picture of the town’s culture. The citizens of Taylor are warm, polite folks who seem to enjoy talking about their hometown. The dead ones have a lot to say, too.

Spell Caster Ghost Tours is adamant about historical accuracy and deciphering lore from actual experience. We’re down with all of it; we just want to clearly communicate the differences. And the best way to discover legends and folklore is to chat with locals at a favorite watering hole.

On my second visit to Black Sparrow for a beer and veggie burger to-go, I asked Cort, the manager slinging suds for the night, “What’s up there?” As I pointed to the ceiling. He looked at me and answered with a hint of a sigh, “nothing. And you’re the second person this week to ask that.” I confidently said, “Well, there’s something up there…”

Cort poured my draft and told me that a medium was in the parlor the week prior; she was the one who asked about the space above. She also said something was going on up there – she could “sense it.” I’m not sure if I was sensing something or had a brief flash that guided me to ask; I’m guessing it was just my curious nature. We chatted a bit more about the maybes and possibilities of the mysterious space above our heads before I left with my supper.

A couple of weeks later, I returned to Black Sparrow for the same, a cold pint of draft and a veggie burger to go. It was a busy weekend night, people dancing, eating, and drinking; the energy was electric. I placed my order and began chatting with a few folks at the bar while I waited. They were busy, so I ordered a second beer (patience makes me thirsty), and listened to Cort talk about the fantastic getaway he and his wife had just returned from the week prior.

Just a few sips into beer number two, my supper was delivered in a brown paper bag with a handle and placed on the bar between Cort and me. And that’s when my suspicions were validated. There was no denying or questioning it; my new favorite “haunt” in Taylor is indeed haunted.

Cort was in midsentence when he suddenly stopped speaking. Our eyes moved to my veggie burger in a bag. The bag was shaking. Vibrating. Then, the bag scooted itself about two-three inches along the bar, moving closer to me. Cort and I looked at each other, speechless but intrigued.

We broke our stare of wonder, and Cort grabbed the bag. “Did you see that?!?!” We shouted to each other and the same time. Cort began to unpack my to-go order, “What do you think you’re going to find in there? A frog?” I asked him, trying to make light of what we had just experienced. “Or a kitten. Did you see how far it moved?” Cort responded. I could hear a blend of “no-way” and “holy shit” in his voice.

He emptied and repacked my takeaway supper; there was no frog, mouse, or kitten, just my veggie burger. So what was it? Who was it? Was it a message? Or maybe just a prankster ghost wanting to grab our attention? I don’t know, but what I do know is that my supper dancing on the bar isn’t the only paranormal activity that has gone inside the Black Sparrow Music Parlor.

The following week I mosied in around lunchtime to chat with a few folks about Taylor’s history and what it was like growing up there. Before I left, I headed to the loo. When I walked in, the light was off, and both stalls were available.

I flipped on the lights and headed into one of the stalls. I heard the other stall door shut, so I took a peek under the divider, confused because I didn’t hear the actual restroom door open. No shoes.

As I was about to walk out of the stall, I heard the other stall door slowly creaking; it was open when I came out. I washed my hands and hurried back to the dining room to share my latest encounter.
Paranormal Investigators from Austin conducted an investigation at the Black Sparrow in 2020 and captured quite a bit of activity. Their evidence can be seen on their Youtube channel, Truly Haunted. They used a few different devices and uncovered the voices of what seemed to be an intelligent haunting. The owner and staff all have their own speculation on who it may be, though I don’t think it’s just one energy.

The Ghosts of Taylor, Texas

So who are the ghosts haunting Black Sparrow Music Parlor? Who knows? The town of Taylor is full of ghost stories and personal paranormal experiences, but nobody can ever be truly certain of what or who these spirits are. I think we’d be pretty vain to assume we know much of anything about the supernatural – which is why it’s called the supernatural, or paranormal. One day we’ll have answers, but I’m not rushing to the finish line.