There was a hanging at 2:07 PM on Friday, March 30th, 1906. Tom Young was a horse thief, town menace, and now the convicted murderer of his very own niece, twelve-year-old Alma Reese. Tom was the first white man legally executed in Williamson County. It was a public execution; some reports say there were up to five thousand people present at the Poor Farm to witness the snapping of Tom Young’s neck.

Tom’s uncle, Reverend Isaac Young, pleaded for Tom, declaring that Tom had found religion. Tom had changed his ways… the week before his execution. The pleas fell on deaf ears, as the largest crowd to ever assemble in Williamson County waited for the noose to be slipped around Tom’s neck in the name of justice for Miss Alma.

James Thomas “Pete” Young was the first white man legally executed in Williamson County. A cotton chopper with an evil streak. He was approximately 42 years old when he was hanged at the gallows on Poor Farm in Georgetown, Texas.

A horse thief, bigamist, and now convicted murderer, Tom had never been a positive contributor to society. Perhaps Tom summarized himself best: “I reckon I’ve done everything that a man could do, though I’m not so bad as many think I am.”

On May 8, 1905, eighteen miles north of Georgetown, a group of farmers in Florence, TX, reported to authorities that Tom Young was beating “his little girl.” Two volunteers headed over to check on the validity of the report. When they arrived, Tom took off running. He was caught, but not without a fight. Tom had a knife, but the two who captured him were packing six-shooters. Tom was held until the law arrived to load him up and take him to jail.

Tom’s wife was also arrested. But when the Mrs. agreed to testify against Tom, she was released. Her testimony detailed the brutality and cruelty her husband committed against the young Alma.

Little Alma Reece came into the custody of Tom Young and his wife when he promised her mother in Falls County that he would give Alma a good home, better than the one she was in at the time. But when Tom came into Florence with his niece, folks saw that Alma was not in good condition. So some of the good people in Florence tried to get to the bottom of just what was going on in Tom’s house.

Townspeople were quoted in newspapers of the time that Alma confessed to being abused by Tom, “violated by the beast in human form.” The stories went on to tell of heinous acts committed on poor Alma, tying her to a tree for lashings, using a “blacksnake whip” on her, beatings so severe they fractured her skull. Until, eventually, her fragile body, could take no more.

When Alma’s body was taken to the medical examiner, her abused body proved the stories true. Parts of her scalp were torn away from her skull, one of her wounds succumbed to gangrene that was moving into her bones, and her claims of the brutal sexual assault confirmed. Tom Young was indeed a beast.

At the trial, Mrs. Yound’s testimony corroborated and confirmed the prosecutor’s claims. She told the court that Tom raped Alma. “Tom whipped her for three hours while she was chained to a post and with blood running down her body, she cried out, ‘O kill me now, I can’t stand this,’ as he threw acid in her wounds.” On May 18, 1905, he was found guilty and sentenced to death by hanging.

On the Sunday before the hanging, Tom found God. Or so he said. It seems the good intended and constant prayers for his soul, done by Mrs. Neal, mother of the County Attorney, had converted Tom to the ways of the Lord. Mrs. Neal believed that her visits to Tom, urging him to seek salvation, cleansed his soul.

The day before his execution, Tom’s uncle, Rev. I. B. Young, arrived from Jonesboro, Texas, to continue Tom’s journey into salvation and absolution. The good Reverend baptized Tom in the prison bathtub. After his symbolic bath, Tom declared his sins had all been forgiven, and his “salvation assured.”

Mrs. Neal, student preachers, and church leaders gathered in front of Tom’s cell and sang, “O Happy Day” and “Are you Washed in the Blood?” as Tom joined them in tune. The hours were counting down to his hanging.

Sheriff Connell offered Tom another chance to confess to the atrocity he committed to poor Alma, but Tom declined. Instead, he told the sheriff that he had confessed his sins to God and didn’t need to confess anything to man. He claimed to be a “changed man.”

However, it’s reported that on the morning of his execution, Tom confessed to his attorney that he had indeed committed murder. Two murders.. Tom said he killed two men, and a “certain man was wrongfully suspected of being the murderer.” Followed by professing salvation, not regret.

Sheriff Connell read the death warrant as Tom swayed back and forth in a daze. Finally, when the sheriff finished, Tom stood up straight and exclaimed, “Yes sir! Come, let’s finish this thing!” Deputies then led him out of the Old Williamson County Jail in cuffs and chains and into the wagonette that awaited him. Mrs. Neal had made him a boutonniere and bouquet of violets to carry in one of his shackled hands. Tom waived the bouquet at the women onlookers, almost celebratorily.

Just before Tom stepped into the wagonette, he leaned down to Sheriff Connell’s son, Sampson, and said, “Goodbye, Sampson. Be a good boy and meet me in heaven.” Something about being a murdering pedophile who finds salvation 24 hours before execution creates a proud, well-wisher of goodness.

To The Gallows He Goes 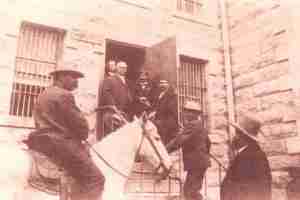 Escorted by a large group of law enforcement officers (there were rumors buddies were coming to free Tom), the execution procession began through downtown Georgetown and to the Gallows in an open field at the Poor Farm. As they arrived, Tom looked out at his platform to death and uttered, “That is no unpleasant sight to me.”

As Tom sat in the wagonette, anticipating the following steps, one of the deputies realized they forgot to bring his “black cap,” the hood placed over their head before the lever to death is pulled.  A crowd of thousands waited while someone rode back to the jail to retrieve the black hood. It was then that a mysterious stranger approached.

A well-dressed man with a mustache approached the wagonette; he asked Sheriff Connell if he could have a word with Tom. “I want to ask only one question; tom, who put you up to that thing you did to me? You needn’t fear to tell. I don’t want to hurt anyone for it.”

The stranger spent 20 years in the same penitentiary that Tom was in for horse theft. It was there that on three separate occasions, Tom tried to kill the man.

The man continued with his questions:

“Was it the officials?”

Reverend I. B. Young held Tom’s hand on his walk to the Gallows. An impromptu choir sang “Pass Me Not O Gentle Savior,” and Tom obligingly sang along. Then, as the song ended, the Rev. began his sermon.

I know Tom Young has been a great sinner, but I believe he has repented and is saved, and it is better than he should die – even on the scaffold – than go on in the life he was leading. This execution is only the reaping of wild oats sown in his reckless youth. There are men in this crowd who say they will take Tom out, hang him if the officers do not do it. You are murderers at heart. Death is a debt we all have to pay, though seldom on the gallows. Take warning.

The prosecuting District Attorney approached Tom with a trembling hand and tears in his eyes. He shared his thoughts with Tom, “It is an awful thing to die, but a great thing to be prepared for it.” Tom told him he held no grudges and that he hoped he would “be as ready to die when your time comes.”

But is Tom Young really at rest?

Before Tom’s execution, someone boldly asked him if he had any intention to come back “from the other world.” Tom left the haunting option wide open, “I am going to leave that to God. If He is willing for me to come back, I will come, if it is only to save some poor sinner like me.” 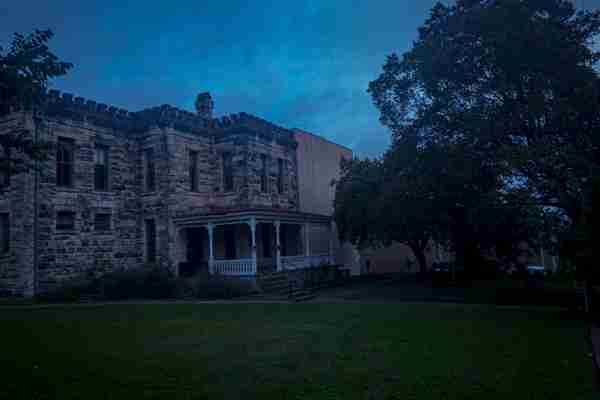 So, are the paranormal occurrences that happen inside the Old Williamson County Jail Tom spreading his gospel? Obviously, we’ll never know. But the disembodied footsteps and voices that travel ominously through the air definitely belong to some lost soul…